Color Your Own Traditional Japanese Masks By Amy

It’s time for something educational AND fun! Thanks to Amy Konecny of Unique Creations by Amy, you can print out your very own traditional Japanese mask to color. These beautiful masks show off people and creatures from Japanese mythology. Amy explains what the meaning of these masks are as well as what they were traditionally made from. Thanks Amy!

Make sure to tag #ACJrAtHome and Amy to show off how you decided to decorate these beautiful masks. Tag Amy to say “Thanks!” Facebook: Unique Creations By Amy | Instagram: @uniquecreationsbyamy

About Traditional Japanese Masks: Traditional Japanese masks are made from many materials clay, wood, leather, cloth, paper, or metal. Today they are mostly decorative and you can buy them at shrine festivals and events in Japan or on the internet here. Most of these mask are people or creatures are from Myth, Ancient Dances or Noh Theater, or the masks Samurai wore. The masks used in this series are all Yokai or Monster masks. 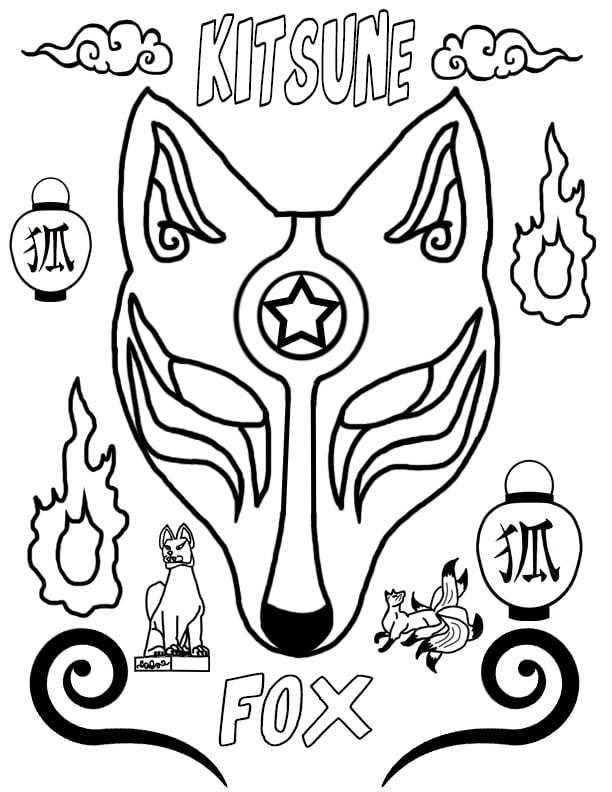 Kitsune: One of the most popular Japanese masks are the Kitsune or Fox masks. Kitsune can be both good and bad. Some are guardian spirits that protect Temples/God/or special people. Some are Yokai or Monsters like the 9 tailed-fox which is usually a trickster spirit. Weather they are good or bad sprite foxes can cast magic and are know for “Fox Fire” blue magical flames that can do more than just burn things. On this page you will see both the Japanese and English names, the Kanji for Kitsune, a temple Guardian and a 9 tailed fox, fox fire and of course a Kitsune mask. A tip for remembering how to spell Kitsune: Kit-Sun-E 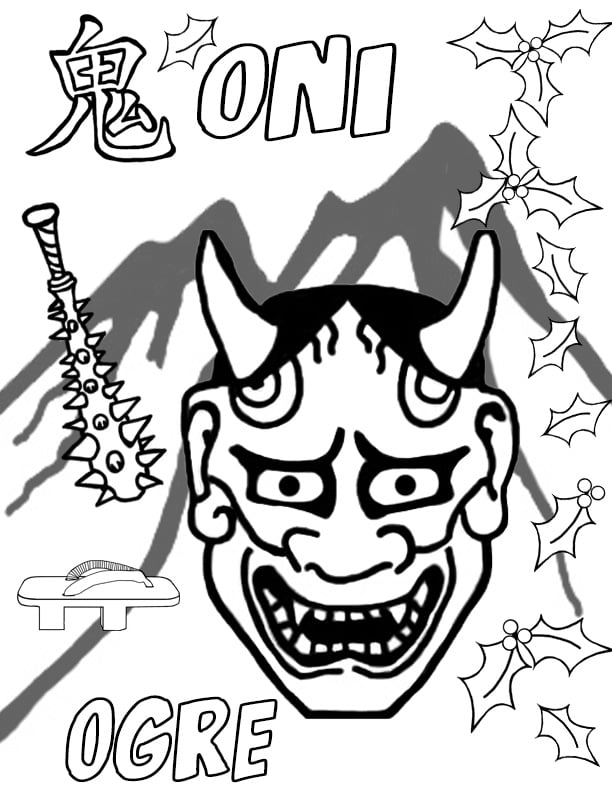 Oni: Oni are another type of Japanese Yokai or Monster they are much like our Ogres or Trolls and are always the bad-guy. They are typically portrayed as hulking figures with one or more horns growing out of their heads and carry a large spiked Iron club. If they ware shoes they will always be traditional Japanese sandals, but often times are barefoot or just have foot wraps (cloth warped around the foot). Oni are often found in Mountains, Caves, or abandoned places. Holly is used to protect you from them. On this page you will see both the Japanese and English names, the Kanji for Oni, a Mountain in the background, Spiked club, some Holly to protect you from the Oni, a traditional sandal, and of course an Oni Mask. 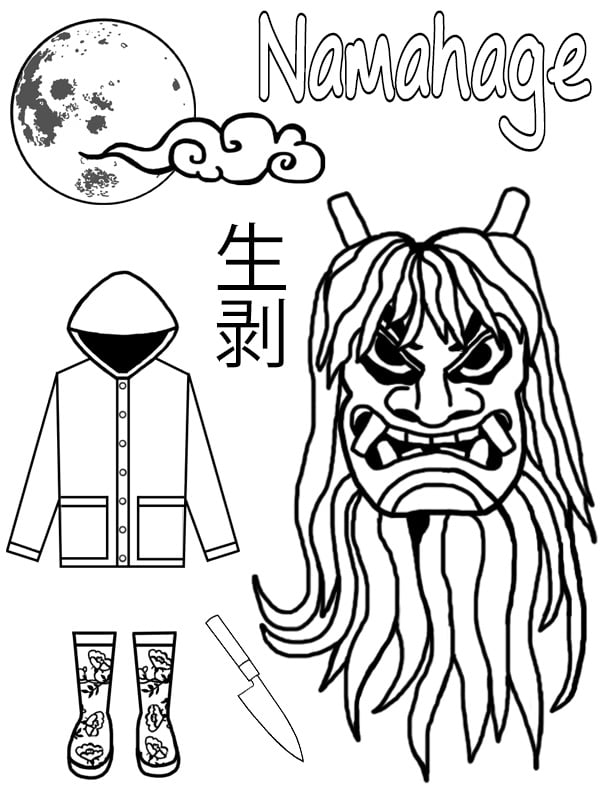 Namahage: Once a year, during koshōgatsu—the first full moon of the New Year—the Namahage descend from the mountains to scare villagers. They go from door to and brandish their knives, saying things like, “Any bad kids here?” They particularly enjoy scaring small children and new brides. Despite their ferocious appearance and behavior, they are actually well-meaning yōkai. They are sent down from the mountain as messengers of the gods to warn and chastise those who have been lazy or wicked. Today, the namahage play a major part in New Year’s festivities in Akita Prefecture (old Dewa Province). Villagers dress up in straw raincoats and leggings, don oni masks, and wield large knives. They go from house to house and play the part of namahage. 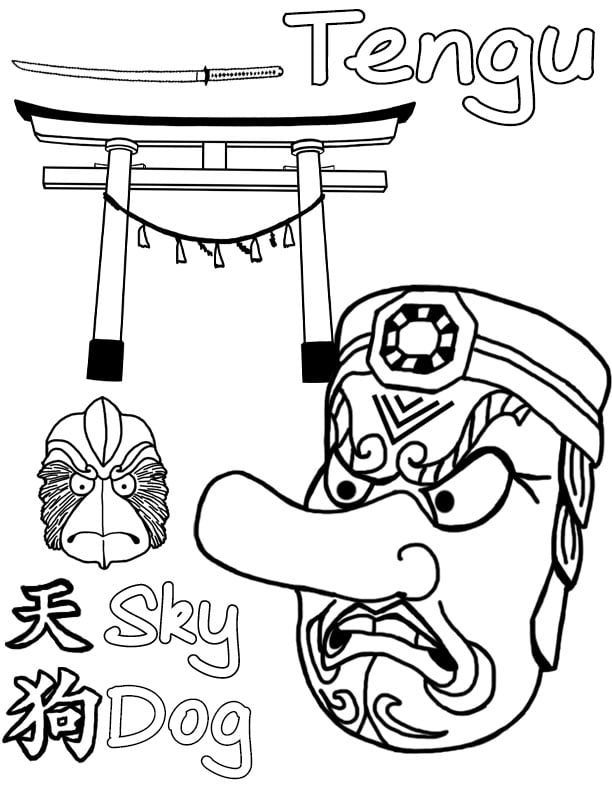 Tengu, Sky Dog: The tengu were originally thought to take the forms of birds of prey, and they are traditionally depicted with both human and avian characteristics. The earliest tengu were pictured with beaks, but later had an unnaturally long nose, which today is widely considered the tengu’s defining characteristic in the popular imagination 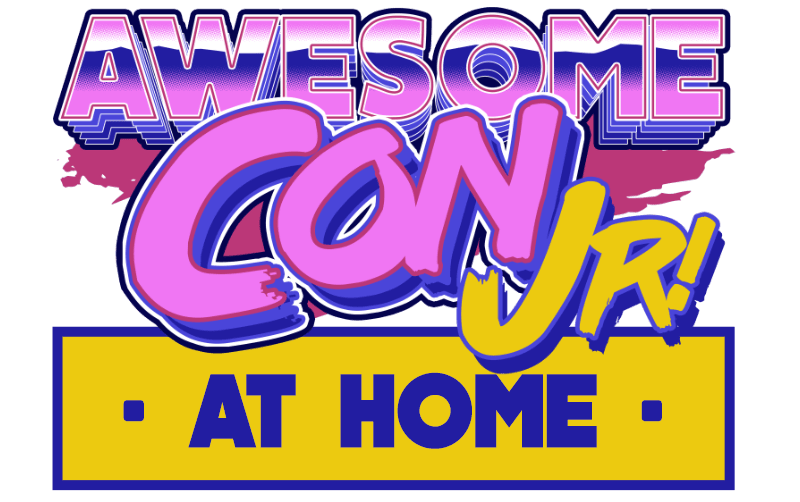