Make sure to RSVP on Facebook so you don’t miss any of the great films from the 2020 Awesome Con Short Film Fest. SELECTIONS IN SCI-FI, ACTION, AND HORROR 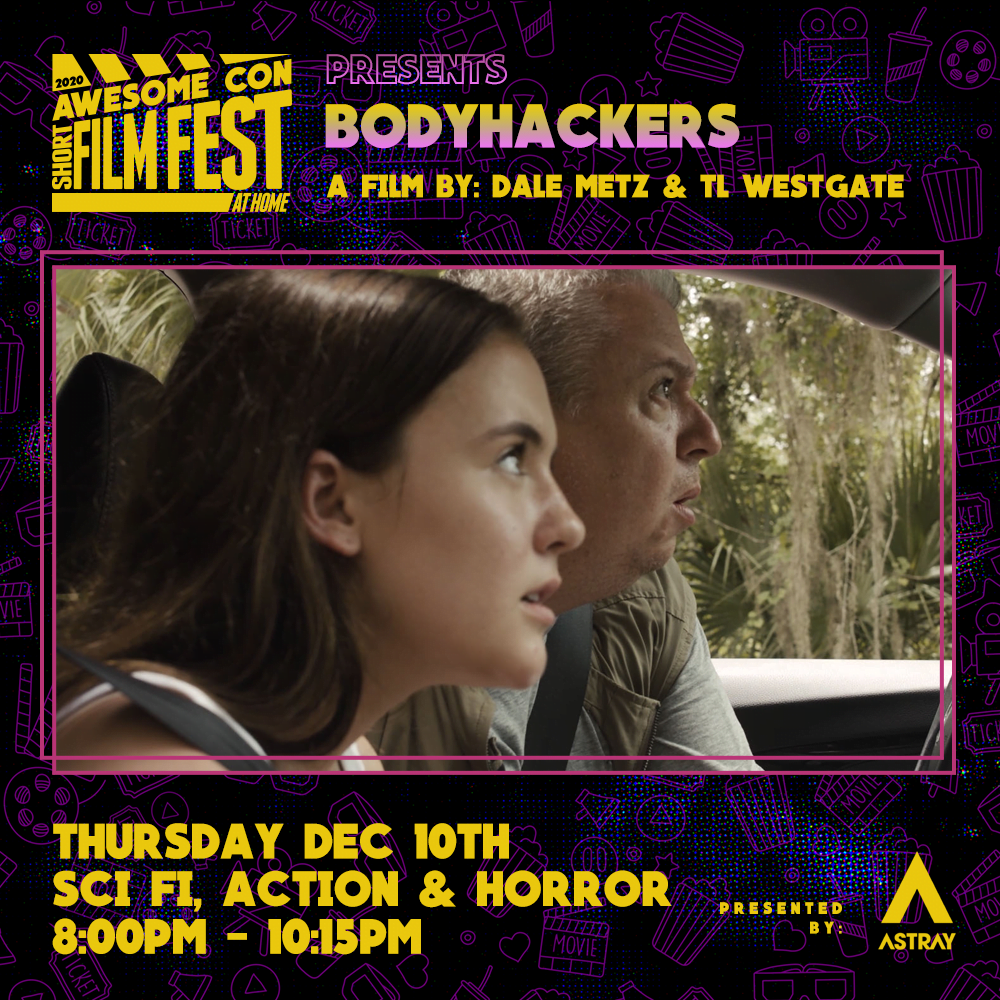 Dale Metz has been a photo and film enthusiast for years. In early 2010, upon retiring from a career in the fire service as a Deputy Fire Chief, he developed a passion for film-making. The ability to use knowledge learned as a still photographer when creating a story through film has opened a new dimension of expression.

Born and raised in Florida, he received a Bachelor degree from Florida State and has studied photography through Seminole Community College and various workshops. His approach to cinematography is very similar to still photography; seeing the moving image as a collection of still photos.

Dale has won numerous awards and recognitions for his photography and short film work and currently donates time as a board member with the Florida Institute of Recording, Sound and Technology (F.I.R.S.T)

TL Westgate was born in Michigan, but settled in Florida as his home starting in the fifth grade. As a graduate from Florida State, he has worked in the video production industry for over 20 years and won several industry awards (Emmy, Telly, Marcom).

In 2010 he began getting serious about filmmaking and has traveled the country to support his films in festivals. They have played in fests around the world and won several awards. He also enjoys photography and has two adult sons. He currently teaches at the Los Angeles Film School. 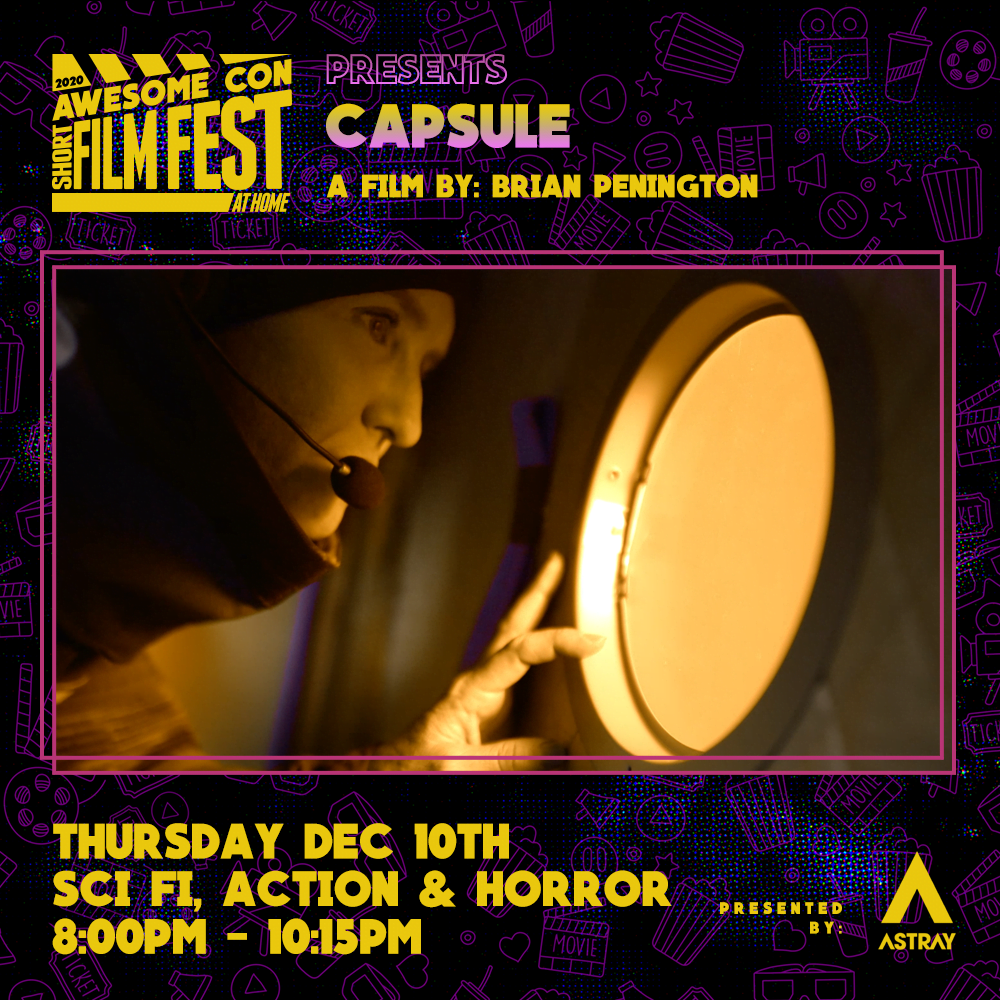 With an Associates Degree in Film from Full Sail University and through his 15+ years in the film/video industry, Brian Pennington brings strong creative talents to the Star Wipe Films team. His skills include all aspects of production with an emphasis on directing and editing. Brian is also an accomplished musician and works as Creative Director and Co-Owner of DUO Media Productions, the commercial video division of Star Wipe Films.

An unsuspecting Lyft driver encounters a strange passenger that gives him more than he bargained for.

Steven Belcher has been a professional film and video Director, Producer, Director of Photography/Cinematographer, Editor, and Writer in the Baltimore & DC area since 2007.

He’s worked on award-winning projects for large companies and institutions throughout the country, and has worked for well-known and established production companies and film & video professionals.

In 2019, he started a collective of filmmakers under the name LOMISFILM to produce original short and feature films. 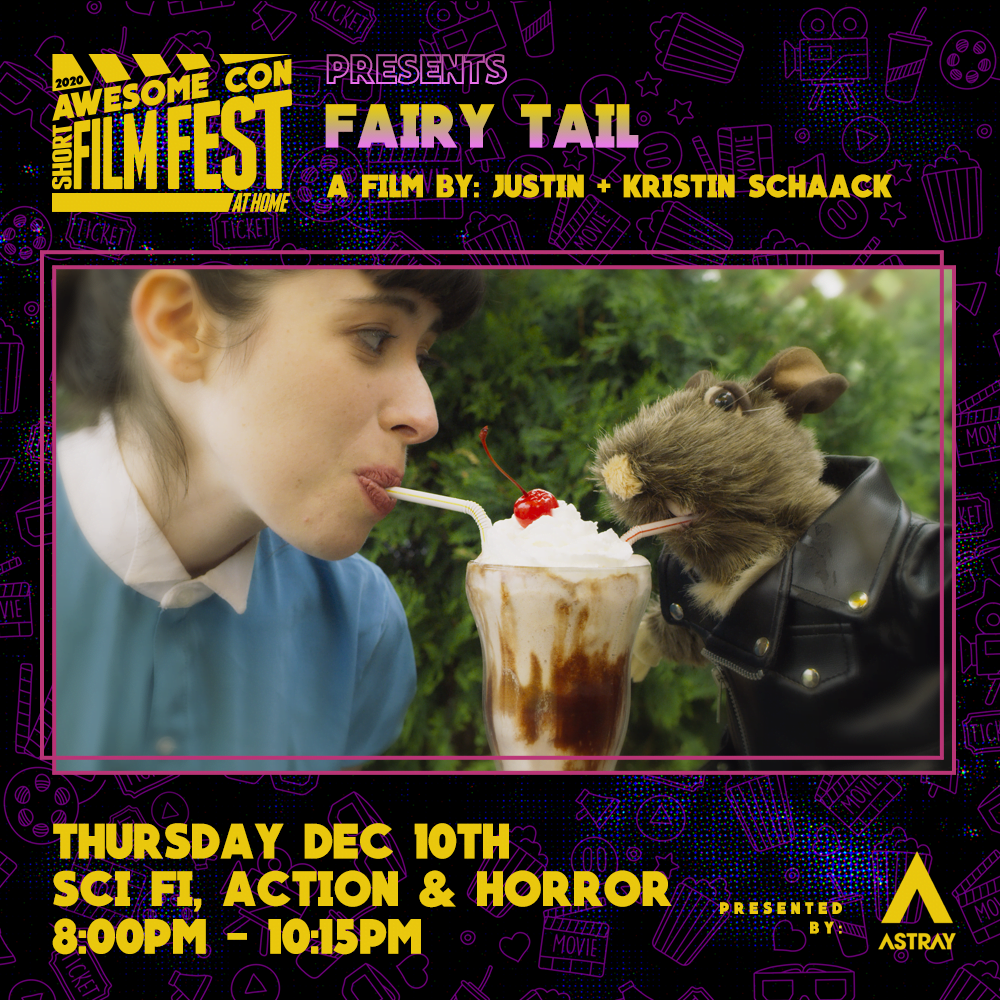 Justin & Kristin Schaack [that’s us] are a comedy writing/directing duo that have been making films together for almost 20 years. We’re a married team that began our creative partnership in the theater waaaaaay off-broadway: 6th grade, middle school productions.

Since our illustrious career on the middle school stage, we both went to film school: Chapman University [K] & University of Southern California [J]. Besides massive student debt, those diplomas come with an appreciation for the works of Godard, Truffaut, and Welles, but if we’re being honest, we’re more influenced by classic comedies & musicals and have a fondness for whimsy & shenanigans.

We’ve found success directing independent films that have screened at 200+ international film festivals and have received numerous audience choice, best film, best comedy, and best directing awards. But alas, those passion projects have yet to bring home the bacon, and by ‘bacon’ we mean ‘money,’ which can be exchanged for goods & services, like bacon! So, in our spare time, we direct and produce commercials and visual content for corporations like Target, Best Buy, St. Jude’s Medical, Buffalo Wild Wings, and so on. As long as we’re working together, it doesn’t feel like work [but we still accept the money — see “goods & services” comment above].

Many tell us that they cannot imagine working side-by-side with their spouse, but for us, we can’t imagine NOT working together. We even finish EACH OTHER’S SENTENCES. [Sorry for the caps, we just started typing at the same time!] 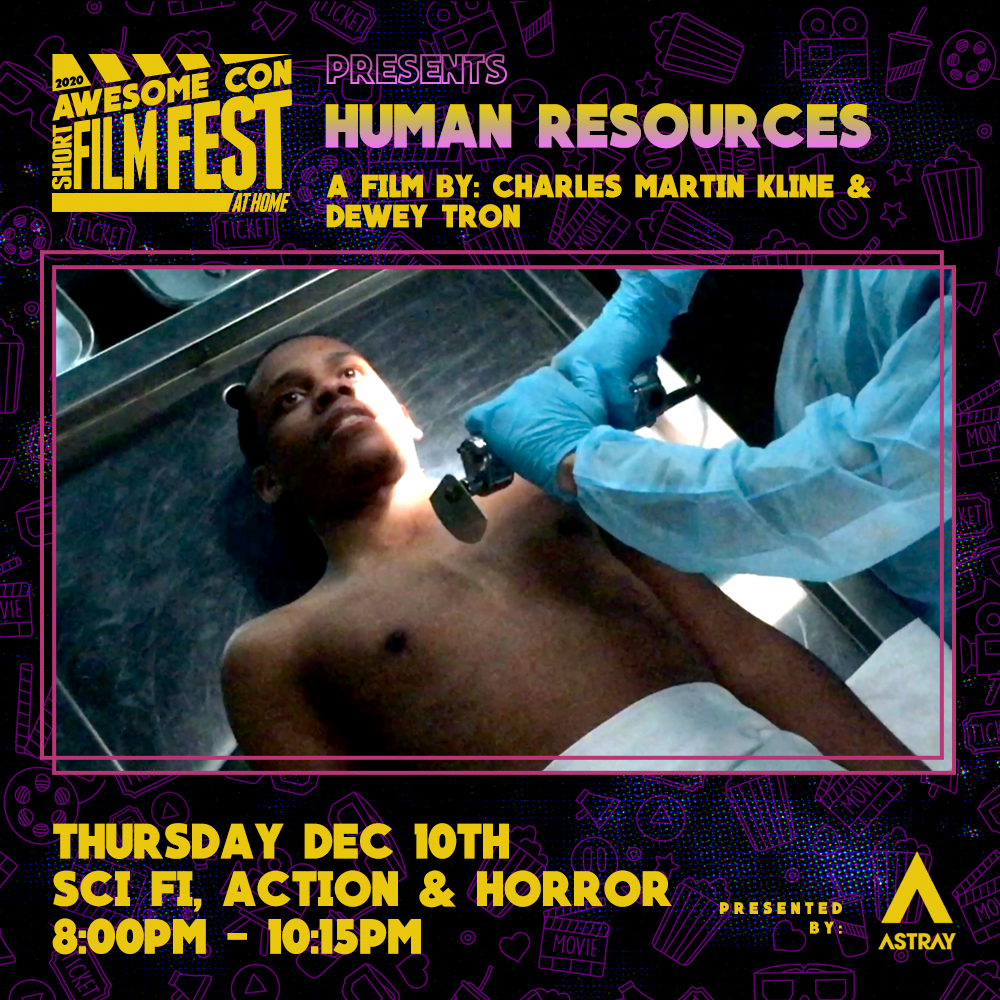 A young homeless man, drugged and kidnapped by crooked cops, awakens in a medical facility and soon realizes his nightmare is just beginning. 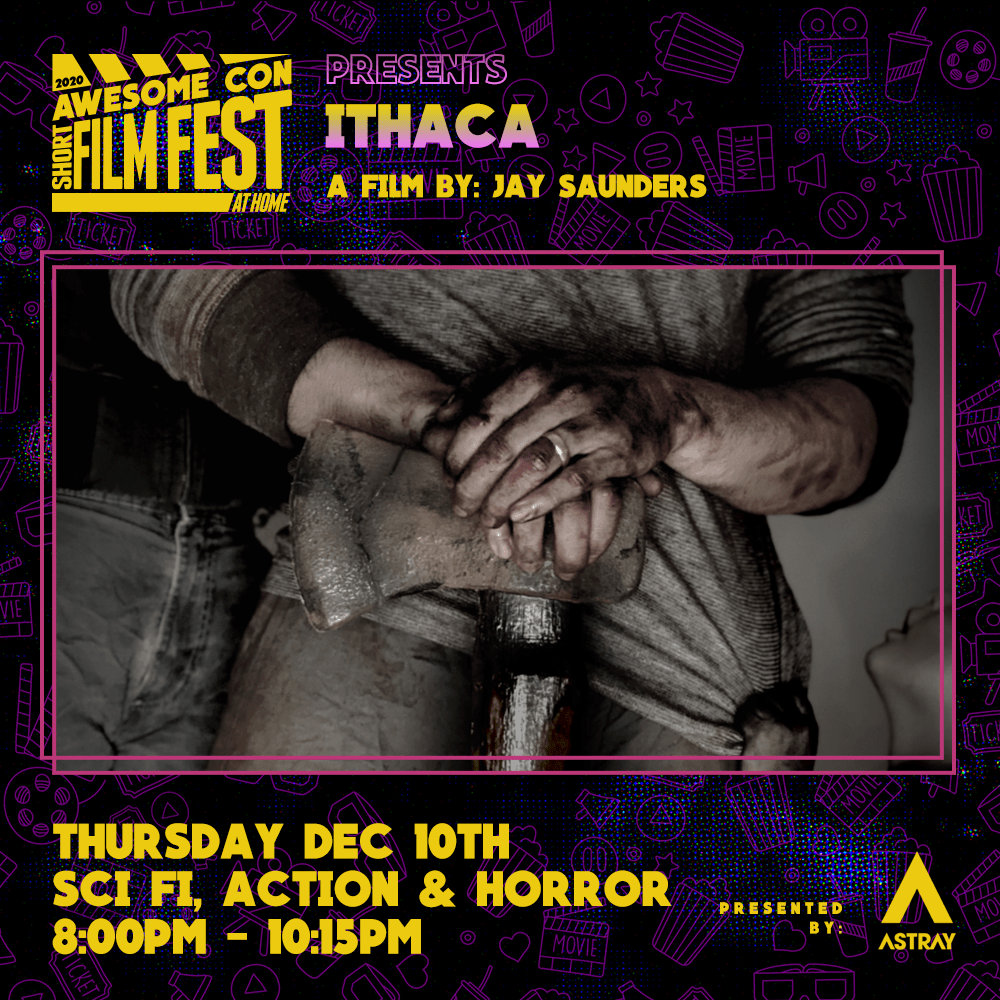 The Miniseries. From Man In The Arena Films, Everything’s Fire, and “The Blair Witch Project” Director Eduardo Sanchez. ITHACA is an adventure mini-series that takes you on a journey through the battlefield of the mind, on a man’s quest to heal his broken legacy. ITHACA has been created with zero budget, only 2-4 crew, and using only free and available resources. Inspired by Homer’s “Odyssey,” modern mythology, and flavored with Balinese Hindu Mythology.

Jay Saunders was born and raised in Jakarta, Indonesia to expatriate parents in 1984. Jay’s interest in film began with an interest in the adventure, war, and horror genres. Jay’s family fled to the USA after the riots in Jakarta, Indonesia in 1998. Jay majored in theater at George Mason University and worked as a theater actor in Washington, DC before focusing on working in front of the camera. In 2014, Jay started creating his adventure mini-series ITHACA with his wife Devon Saunders, giving them both the opportunity to work in front as well as behind the camera. 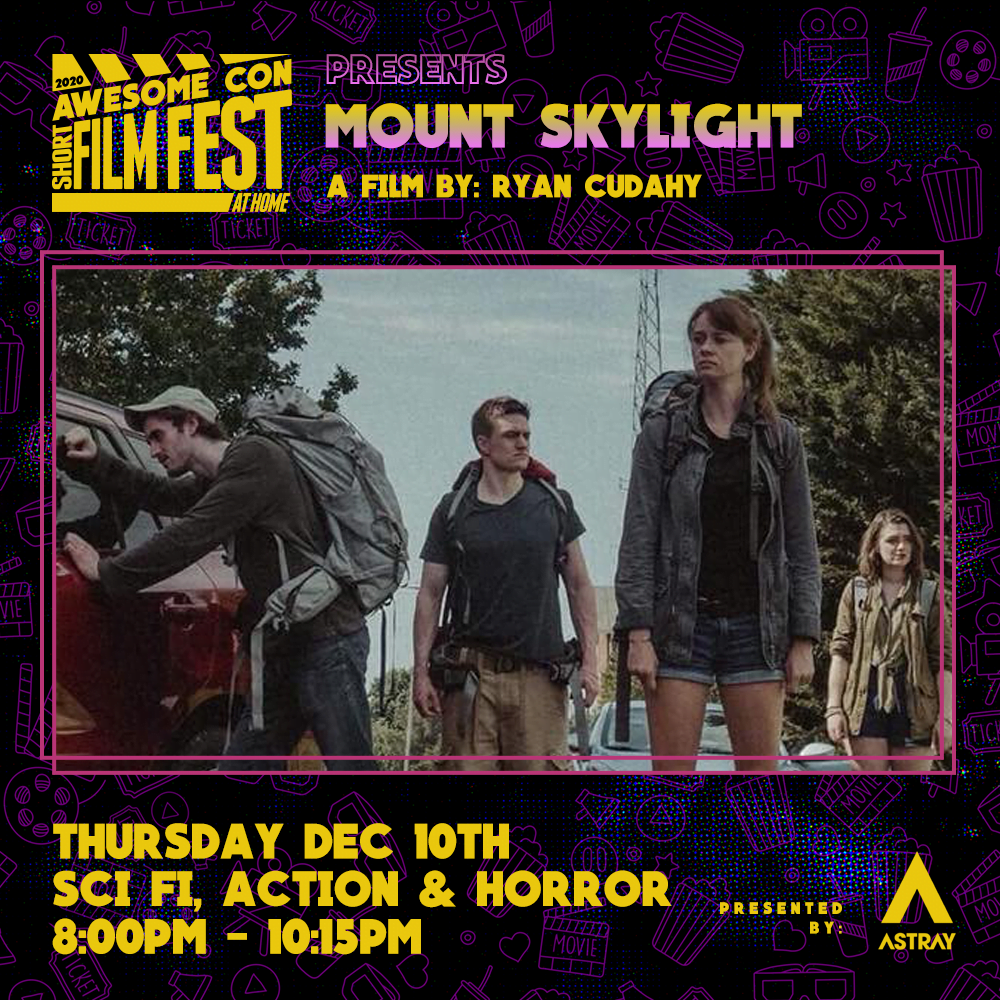 Four recovering addicts return from an extended hike, only to discover that everyone in their town has disappeared. 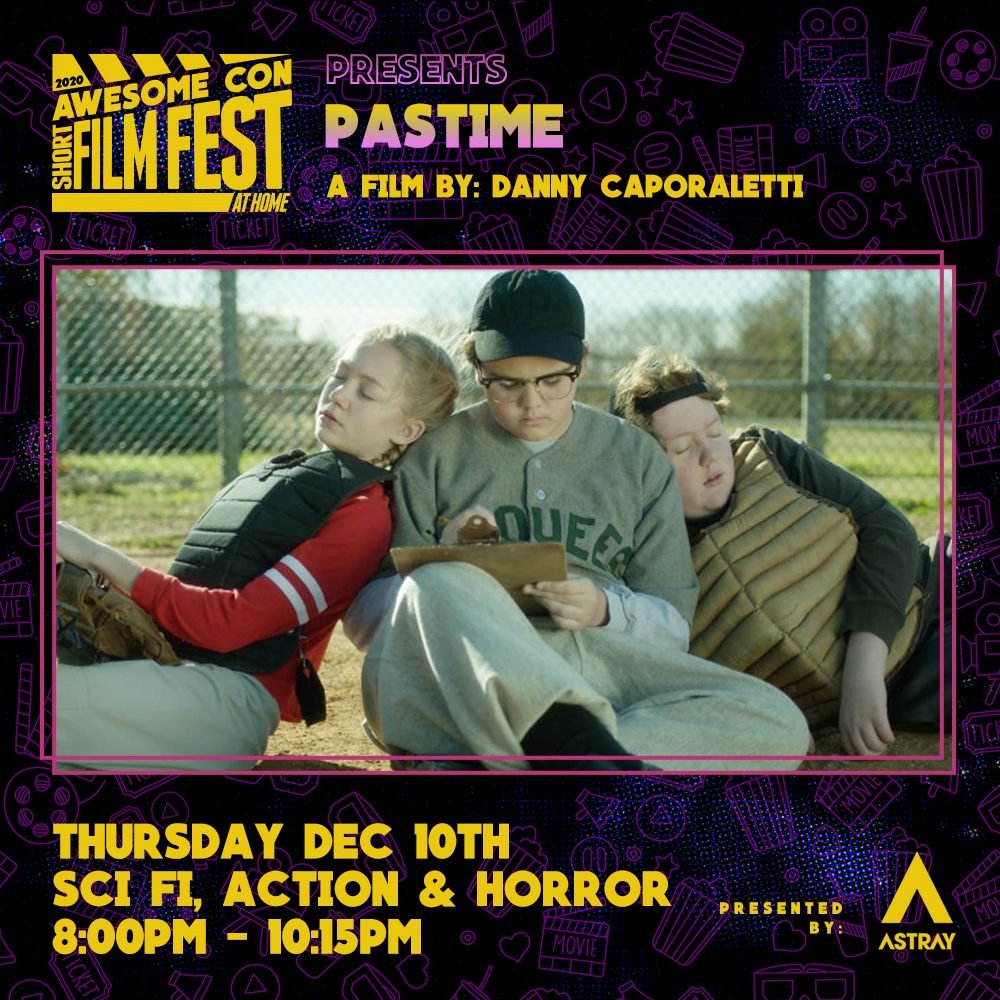 PASTIME is a movie about ghosts, cemeteries, and neighborhood kids playing baseball.

Danny Caporaletti is a filmmaker based in Virginia. His films have screened in festivals and events in DC, New Orleans, Berlin, Richmond, and elsewhere. He has an MFA in Fiction Writing from the University of New Orleans, and works as a freelance director in the Mid-Atlantic. He is a Professor of Cinema at Virginia Commonwealth University. 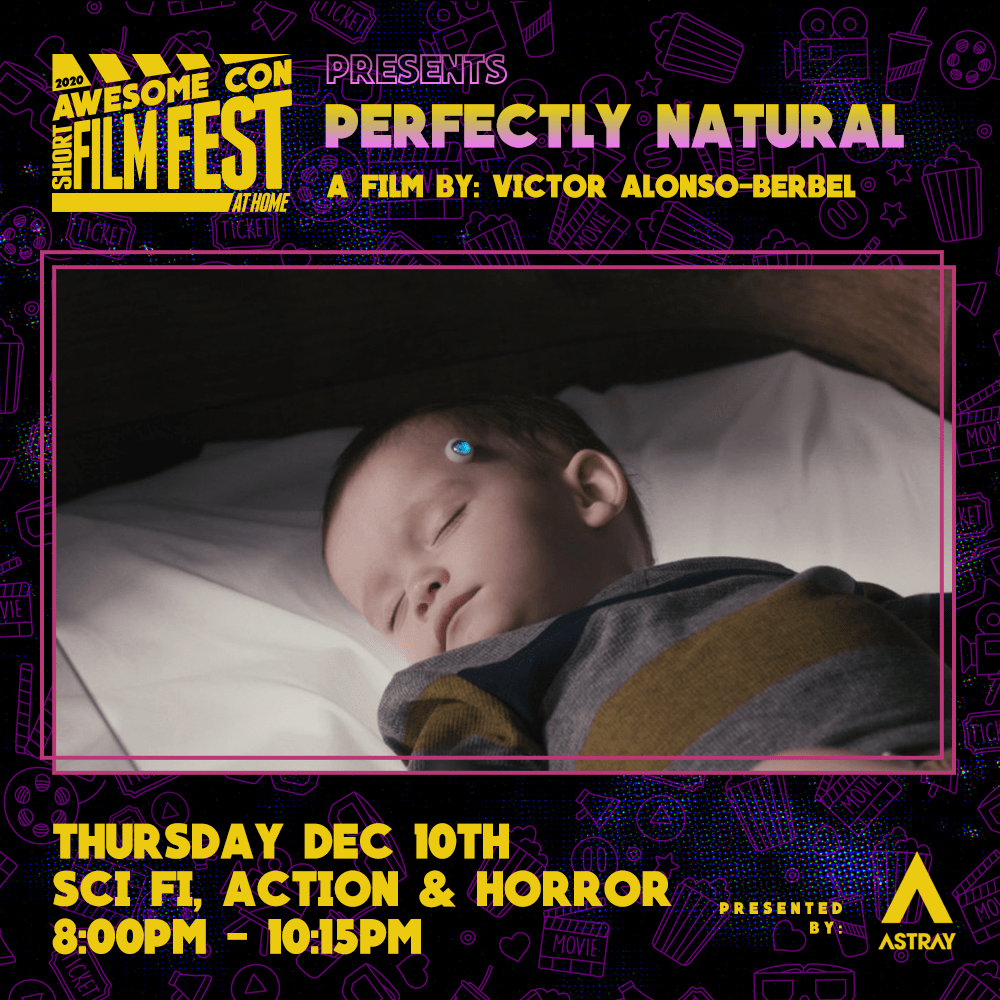 For Wanda and Zach, Future Families is a lifetime opportunity: a virtual parenting system that gives their baby access to a better life. But they soon realize this technology may come at a higher cost.

VICTOR ALONSO-BERBEL (Barcelona, SPAIN, 1993). Writer and director, Film Production graduate from the University of Southern California and member of the European Film Academy, he works between Madrid and Los Angeles. He directed ‘The Brave Class’ (2016), a feature documentary that premiered at DocsBarcelona and was a Best Documentary nominee at the Catalan Film Academy Awards, and his latest sci-fi short film ‘Perfectly Natural’ (2018) was honored by the Directors Guild of America. He’s currently developing his first narrative TV series for Spanish studiosMediapro (‘The Young Pope’, ‘Carnage’) and Atresmedia (‘Money 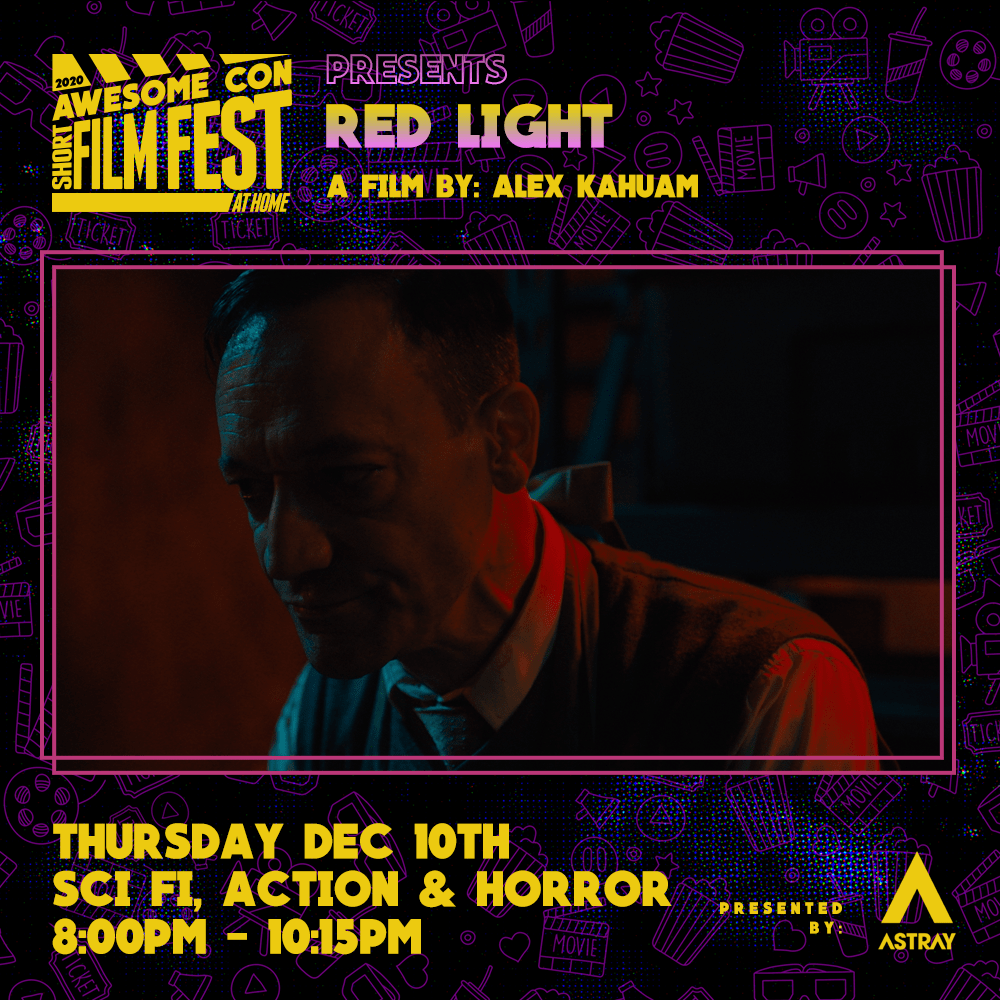 An obnoxious social media influencer and a group of friends on their way to a Halloween party find themselves in a grim world of hell when they run into two twisted brothers. Not even one of their 1 million followers can help them now. 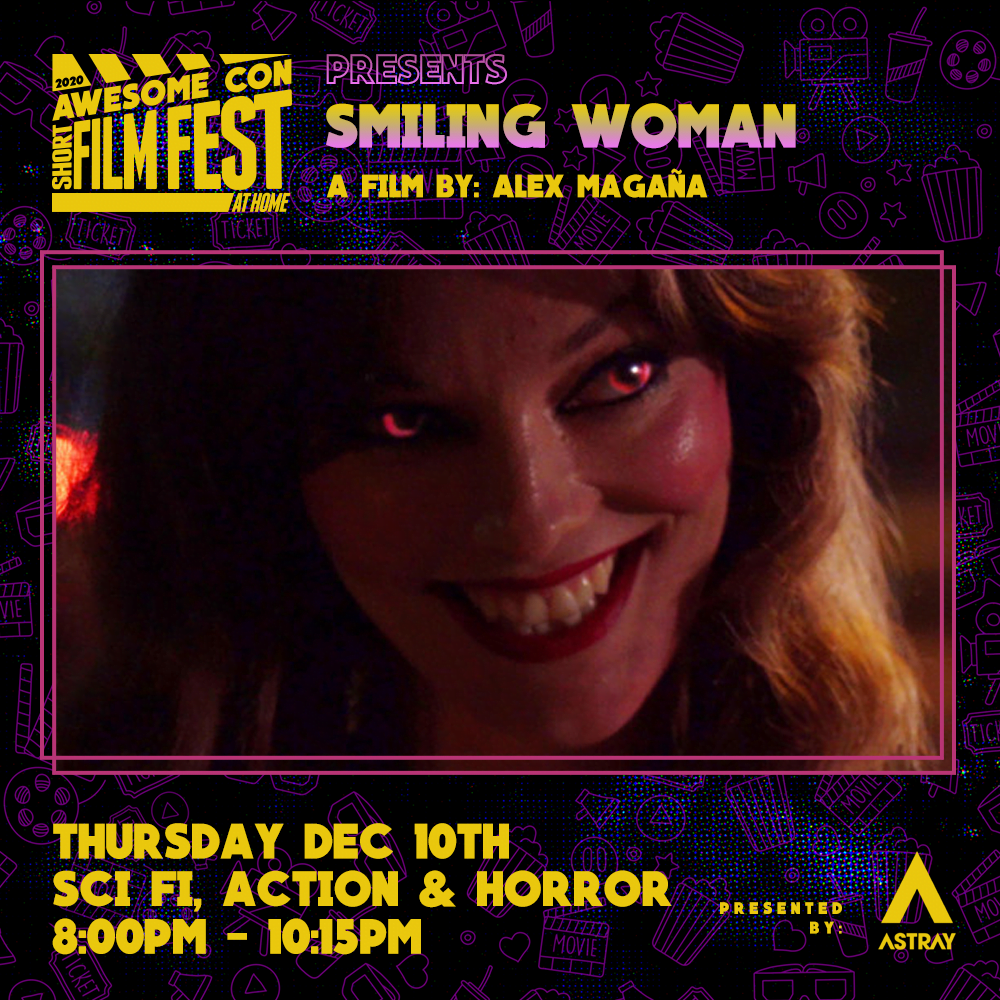 On a late night at an empty train station, a lone traveler is terrorized by a creepy smiling woman.

On a halloween night, when a curious girl is attracted by a huge floating lollipop in a mysterious house, she decides to enter and witnesses the wonders inside, without knowing it is a trap…

Keqian Wang, go by Sofia, is fascinated with drawing and writing since she was a kid. She grew up with pencils and brushes, and she studied oil painting at High School affiliated to China Central Academy of Fine Arts. She is a wannabe painter until one day, she watched IN THE MOOD FOR LOVE directed by Wong Kar Wai, she found her life-time career. She decided to shift from fine arts to filmmaking. Sofia started with directing animation, and she is experienced in directing fiction and documentary. Currently she is a MFA Candidate of USC’s Film Production program, and a LA based storyboard artist. She has faith in God, and believes in real cinema. 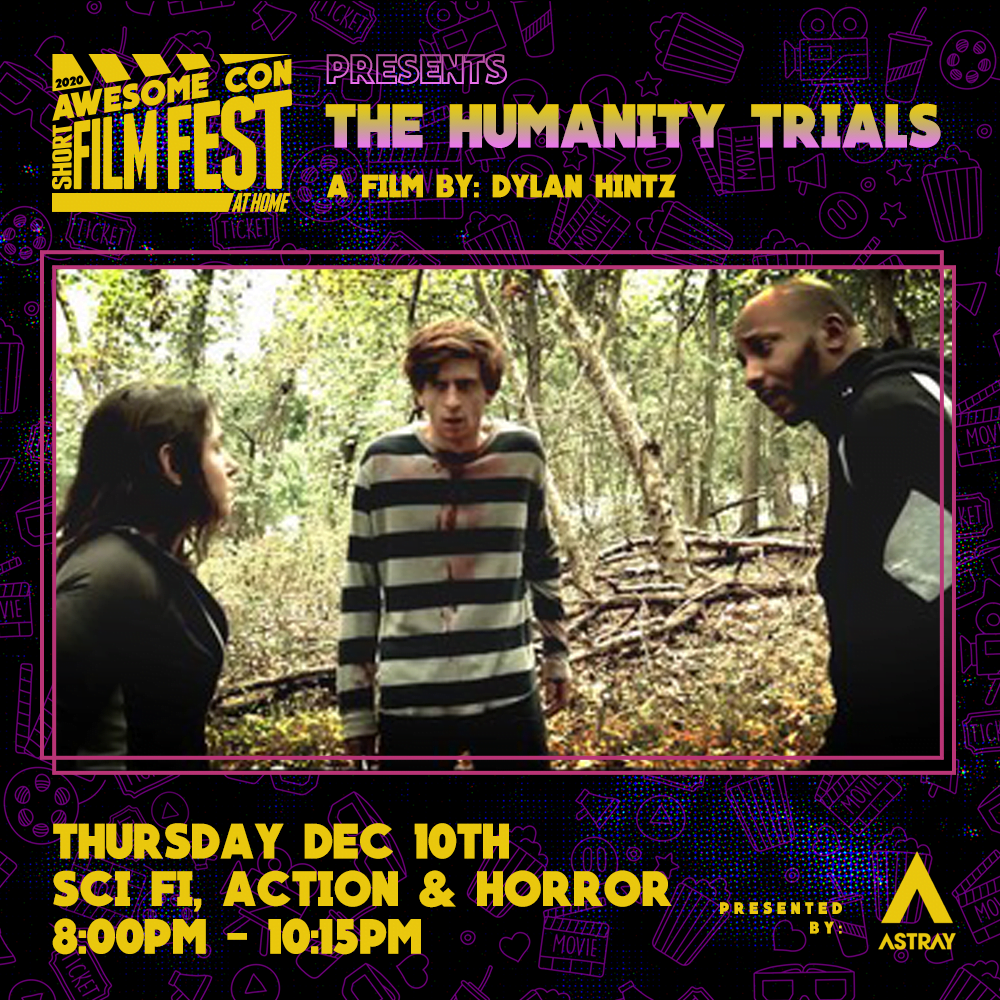 Kidnapped by a mad scientist, a group of strangers must fight to survive while overcoming their own instincts.

Dylan Hintz is a SAG-AFTRA stunt performer based in New York City. His recent credits include Gotham, The Blacklist, Blindspot, and PURGE: Election Year. Originally from Gaithersburg, Maryland, Dylan co-founded the DC Stunt Coalition in 2011 in order to provide an accessible and reliable training organization for current and aspiring stunt professionals in the Washington Mid-Atlantic region. He has served as a stunt coordinator for HBO, CBS, and National Geographic, as well as dozens of independent features, web videos, commercials, and student films in the DC area.

A graduate of Salisbury University in Mass Media Production and Film Studies, Dylan is also an award winning filmmaker and professional media producer, who has been making video content for freelance clients for over 10 years, and has worked as a production technician for Montgomery Community Media and as a broadcast technician for The Kennedy Center.

His work has provided him many opportunities to travel the world and train under some of the best professionals in the stunt, stage combat, and martial arts industries. Dylan regularly returns to DC in order to share his experiences, in an effort to give back and help grow the filmmaking community that raised and inspired him. 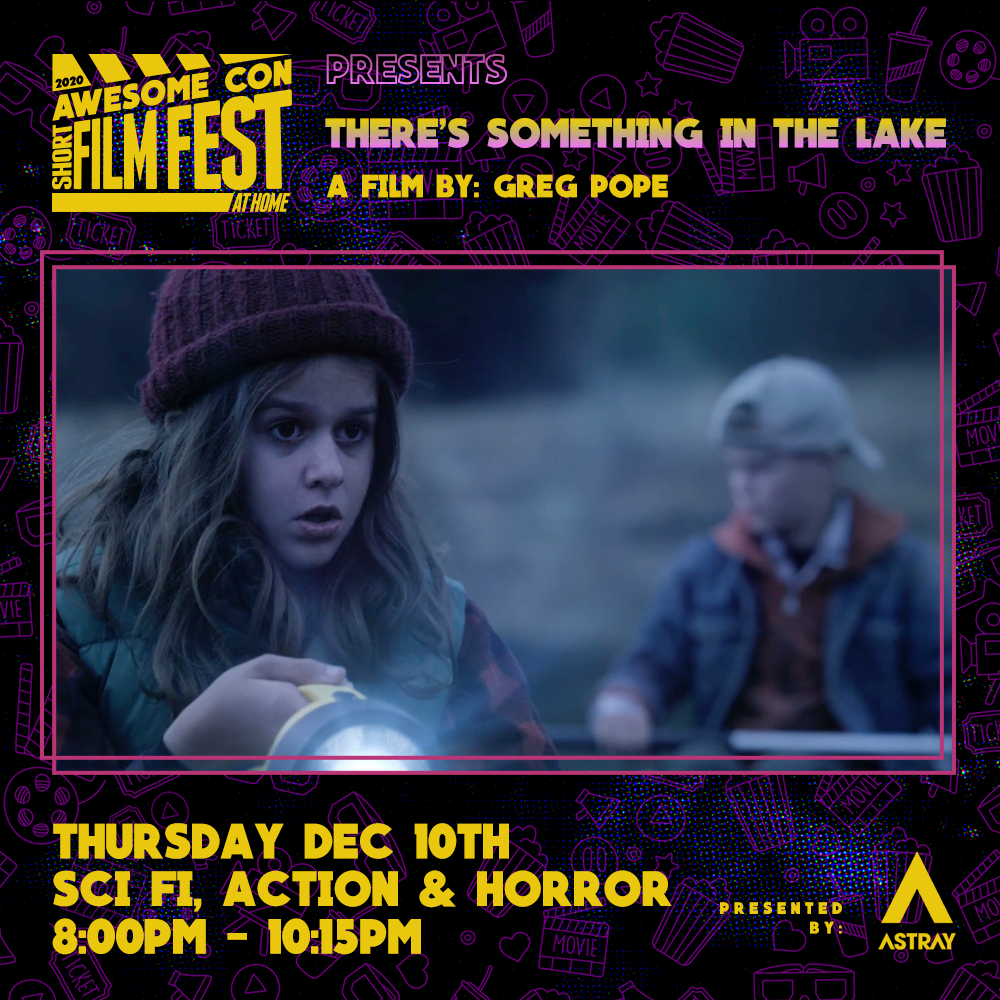 There’s Something In The Lake

After the disappearance of their dog a 12-year-old girl and her little brother set out on a nighttime search, completely unaware they are being watched.

GREG POPE is an award-winning Director and Editor based in Nashville, TN. With a background in art directing and book publishing, he became a full time filmmaker in 2009, founding Octoberville Creative, LLC. Since that time he has produced, directed, and animated content for many major brands (AT&T, Coca-Cola, Marvel). His short film “Giant Monster Playset” (2011) was an official selection at numerous film festivals, including Comic-Con International (San Diego) and was exhibited daily at the Seattle Museum of Pop Culture (MoPOP) in 2013. In 2016, his short film “Girl Vs. Tie-Fighter” appeared on StarWars.com. His current short “There’s Something In the Lake” premiered at the AtlantaShortsFest in August.

A team of Vampire Hunters struggles to cope with the loss of a team member. As tensions run high, suspicion rises to the possibility of a mole in their mist and how things are just not what they seem.

Jose is a producer, director, and director of photography, based out of Marietta, GA. Toward the end of his 26 year army career JB began to chase his childhood dream of becoming a filmmaker and earned a bachelor’s degree in Cinematography from Full Sail University in 2015.

He began his film career volunteering at various audio-visual entities gaining experience as a producer, editor, technical and floor director. He also wrote, directed, produced, and did SFX makeup for several of his own projects.

His recent project “Meat Up” was the official selection of five film festivals and nominated for various awards including “Best Cinematography”, “Best SFX MakeUp” and “Best Score” to name a few.

JB is grateful for all the opportunities and collaborations he has worked on and is looking forward to continuing to build a career and develop a strong network with fellow filmmakers.